Planmeca mRomexis™ is a fast, easy and light image viewing application designed for flexible multiplatform use. It enables quick access to images, allowing dental professionals to conveniently communicate with other specialists and patients wherever they are. Planmeca mRomexis is available for the iOS and Android mobile operating systems, and as a browser-based desktop application. 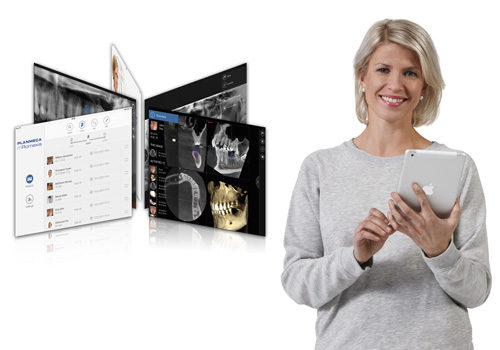 Building on the success of the popular Planmeca iRomexis™ mobile application, Planmeca mRomexis™ is the ideal solution for fast and easy viewing of 2D and 3D images, Planmeca PlanScan® 3D optical impressions and Planmeca ProFace® facial photos. It introduces several fresh features, such as a recent images list, multiplatform support and multiplanar reconstruction (MPR) views of 3D images. Planmeca mRomexis helps users stay on top of their workflow, ensuring that the images most relevant to their next task are always readily at hand.

Planmeca mRomexis allows users to access images in the Planmeca Romexis® database on a local network, or carry images with them on their mobile devices. Images can also be flexibly shared via the secure Planmeca Romexis® Cloud image transfer service.

“When designing Planmeca mRomexis, we put a strong emphasis on usability”, comments Ms. Helianna Puhlin-Nurminen, Vice President, Digital Imaging and Applications division at Planmeca. “The application ensures easy and straightforward sharing of vital images for users who are often on the go – allowing them to always stay informed.”

The iOS and Android versions of Planmeca mRomexis are available on the App Store and Google Play.