Planmeca Cariosity® scanning tip is a convenient tool for detecting dental caries using a Planmeca Emerald® or Planmeca Emerald® S intraoral scanner. The tip uses radiation-free transillumination technology for caries detection and has been approved as a diagnostic tool for dental examinations in extensive clinical trials. 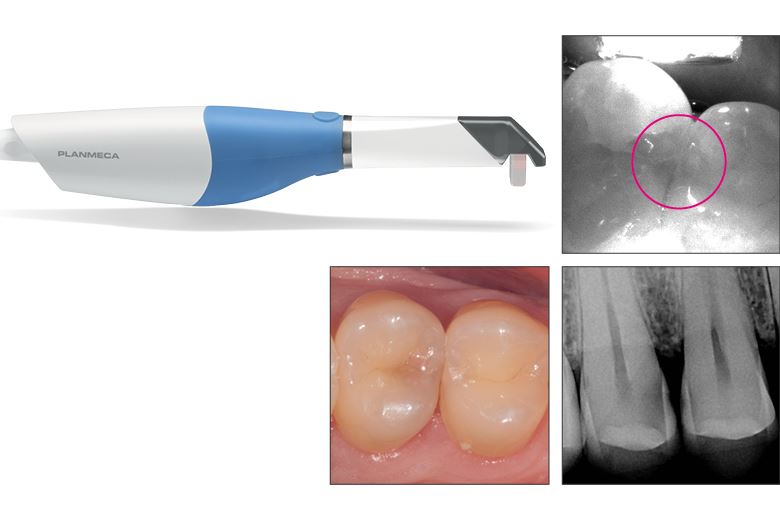 Planmeca Cariosity® scanning tip provides a radiation-free diagnostic tool for caries detection. Attached to a Planmeca Emerald® or Planmeca Emerald® S intraoral scanner, it can be used in dental examinations to spot cracks and fractures in the patient’s teeth, and it helps detect supragingival proximal carious lesions.

The scanning tip uses transillumination technology for the caries detection. In practice, the near-infrared light allows dentists to see through the tooth and detect approximal, occlusal and secondary caries as well as cracks in their early stages. The light can be turned on from one side at a time or simultaneously from both sides to get the best possible view for diagnostics.

The transilluminated images together with a colour picture of the teeth can be stored in Planmeca Romexis® database along with other patient data. The images can be used for patient communication and for monitoring the progression of carious lesions.

First announced at IDS 2019, the Planmeca Cariosity scanning tip has expanded the intended use for Planmeca Emerald and Planmeca Emerald S intraoral scanners. Therefore, the tip has gone through extensive clinical trials and has been evaluated in scientific studies.

As an example, a recently published in-vitro study by Schlenz et al. (2022)* compared the caries detection of several intraoral scanners with the traditional methods for cariology. According to the study, Planmeca Emerald S demonstrated, for instance, “superior results for occlusal caries diagnostics in permanent dentition compared to the established gold standard visual examination.”

Overall, the study concluded that Planmeca Emerald S with Planmeca Cariosity scanning tip is a helpful and acceptable diagnostic tool for dental examinations.

Planmeca Cariosity is currently available in the EU countries. Pending medical device approvals for countries outside the European Union are expected shortly. Please contact your local Planmeca distributor to check the availability in your country.