The first facial tissue transplant procedure in the history of the Nordic countries was performed earlier this year in the Hospital District of Helsinki and Uusimaa (HUS) in Finland. Planmeca contributed to the demanding and rare operation, which was the 35th of its kind in the world to date.

The facial tissue transplant surgery itself took 21 hours and was carried out by a group of 11 surgeons, as well as 20 nurses and other experts. The operation consisted of transplanting the patient’s upper and lower jaw, lips and nose, as well as segments of their skin, midfacial and tongue muscles, and the nerves of these muscles. The head the surgical team, Dr. Patrik Lassus, emphasised that the objective of the operation was to transplant facial functions, not external features. 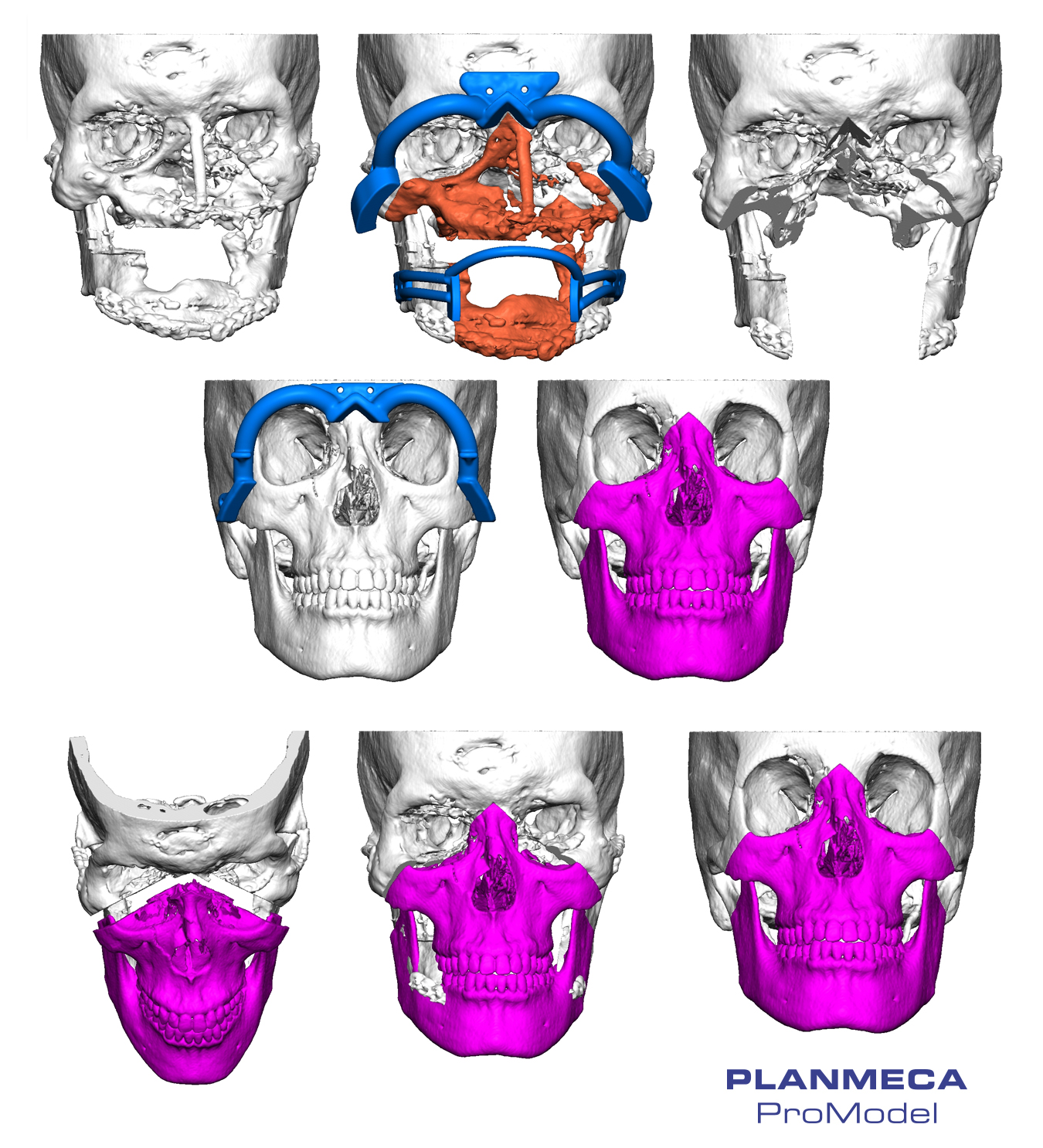 3D planning of the operation with the Planmeca ProModel™ service

The Planmeca ProModel™ service was part of the demanding procedure. It is a unique service for designing and creating patient-specific implants, surgical guides and skull models from CBCT/CT images. 3D technology decreases surgical time and produces significantly more precise results when compared to traditional methods. This makes operations increasingly safer for patients.

Planmeca’s innovation substantially decreased the operating time – saving hours compared to similar procedures previously carried out elsewhere in the world. Conserving time is one of the key aspects of surgery, as longer operations increase the risk of complications. In transplant cases it is also of paramount importance to accelerate the restoration of blood flow.

“Based on literature, we know that it can take 3 to 4 hours to trim bones. In this particular operation, it took Patrik [Lassus] and myself under 10 minutes to place the transplant. This led to a drastic reduction in the duration of the surgery, while also significantly improving the accuracy of bone placement,” described Dr. Jyrki Törnwall, one of the operating surgeons, in the press conference on the operation.

“We had the opportunity to join the surgeons in making medical history. In the end, we reduced the surgery time by 3 to 4 hours and successfully completed the operation with help of 3D planning for the first time in the world. It was a great job by all involved,” stated Horelli.

At Planmeca, planning the operation began around three years ago. Careful steps were taken in preparing for the upcoming procedure.

“Planmeca’s part consisted of two phases. First, we designed the surgical guides together with Dr. Lassus and Dr. Törnwall, as well as determined the kinds of segments that would be surgically removed from the recipient and transplanted from the donor. At this point, we were anticipating a scenario, which would become concrete once a donor was found,” Horelli recounted.

“The second phase began immediately once we received word of a suitable donor. An X-ray image of the donor was taken at the hospital and the imaging data was utilised in 3D designing. We also simulated the operation together with the surgeons. Following this, the components were designed and manufactured at Planmeca headquarters and transported to the hospital, where they were taken directly to the operating room.”

“All 3D designing is carried out exactly according to the anatomy of the donor and the recipient. When time is limited and there are significant risk factors involved, there is no room for error,” Horelli concluded.

Using virtual surgery to simulate procedures is an increasingly important part of surgery today. 3D technology is also constantly improving. Planmeca acts in close cooperation with hospitals and surgeons in developing and improving the field. For example, Planmeca’s collaboration with the Hospital District of Helsinki and Uusimaa spans nearly a decade – the facial tissue transplant procedure being a prime example of the benefits of this relationship.

“Planmeca’s role has been essential to our work for years – we have been able to utilise computer simulations to create saw guides, which allow us to saw at a specific orientation and to an exact depth, as well as remove facial structures, which we know match the donor, at a precise angle,” Dr. Törnwall noted.

“Surgeons and us engineers both see tremendous potential in this kind of collaboration. Certain surgical procedures have become more efficient as a result of our work – and also safer for patients. The field continues to advance at a fast rate and it is very interesting to witness this evolution first hand. I am proud to be part of a highly skilled Finnish community of specialists. It feels meaningful to take part in improving the lives of people, who have encountered serious illnesses and disabilities,” Horelli reflected.

“It is a privilege to have a company like Planmeca in Finland, as it can provide us with support and sophisticated technology – ultimately helping patients,” Dr. Törnwall summarised.

NB: The images included are illustrations and do not represent the actual patient or donor.