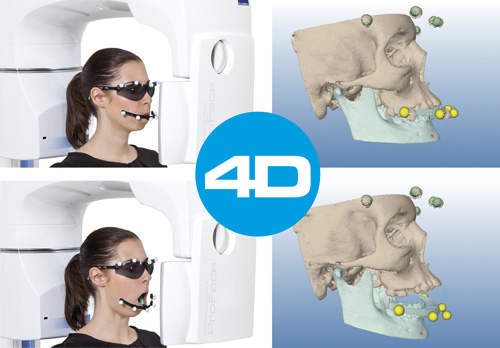 Planmeca 4D™ Jaw Motion is the only true CBCT integrated solution for tracking, recording, visualising and analysing jaw movement in 3D. The system tracks and visualises jaw movements with the Planmeca ProFace® camera feature of Planmeca ProMax® 3D Mid and Max X-ray units – showing the movements in real-time in a 3D CBCT image. No additional hardware is required in the process. Captured 3D visualisations are displayed in the Planmeca Romexis® imaging software without delay, allowing immediate diagnostics. All data can also be recorded for later use and analysis.

With Planmeca 4D Jaw Motion, it is possible to measure and record the movement path of one or more points of interest in a 3D image. For occlusion analysis, digital dental models can be aligned with a CBCT image. All movement and measurement information can be exported to 3rd party software in an XML or CSV format for analysis and treatment planning.